Illuvium has raised $5 million to build a platform that combines non-fungible tokens, or NFTs, with a fantasy battle game. As such, it’s the latest to jump on the NFT craze, and the question is whether the company’s auto battler will be as good as it says it is.

NFTs are hot as enthusiastic crypto fans (who have boosted Bitcoin’s value to above $50,000 per coin) get more excited about buying and collecting NFTs, which can uniquely identify items and establish ownership. In the past couple of months, interest in NFTs has skyrocketed as NFT collectibles such as NBA Top Shot (a digital take on collectible basketball cards) have taken off, generating more than $100 million in sales.

NFTs use blockchain, a secure and transparent digital ledger, to verify one-of-a-kind items. NFTs can verify the authenticity and rarity of digital collectibles and in-game items. The funding came from Framework Ventures, which is an established venture capital fund in the decentralized finance (DeFi) market.

The game is a strategic autobattler. Illuvium has a decentralized gaming platform, and it plans to launch its Balancer Smartpool Launchpad on March 30.

Founded last year by Kieran and Aaron Warwick, Illuvium made a game that rewards players with the opportunity to explore and capture NFT creatures, known as Illuvials, in combat. The game incentivizes its players with a stake in the project, as the Illuvium network allows for the fees incurred within the game to be paid out to staked token holders as ongoing rewards.

Above: Illuvium is an autobattler game with NFT collectibles.Image Credit: Illuvium

“Great art is just half the equation,” Kieran Warwick said in an email to GamesBeat. “Though it is important, and we have that. You can already get great art with real card games. The issue is that you can’t create fun experiences for players without risking their collections getting physically damaged. That’s where digital collections come in. Blockchain solves these problems, but only if everything is just right. We are creating something that goes beyond the art, beyond the single game experience, and beyond what is currently available in crypto. That’s how Illuvium was born.”

Kieran Warwick said the plan is to fuse gaming and crypto in a way that will deliver an entertaining experience with the added value of monetizing good gameplay with rewards.

“There is a deep level of gamesmanship in battles where you have to find ways to counter what your opponent is doing, much like a game of chess, hence the name auto chess,” Aaron Warwick said in an email.

In a decentralized ecosystem, Illuvium players will be able to immerse themselves in an explorable world that features NFT collectible creatures with “four-dimensional-shading holographic” NFT designs. During gameplay, Illuvials can be captured to gain power for ascending higher levels in the game or to earn crypto income by selling them on an exchange for Ethereum cryptocurrency.

Illuvium is planning to create a world that can support a variety of titles in multiple genres with the option to open the world to other developers. 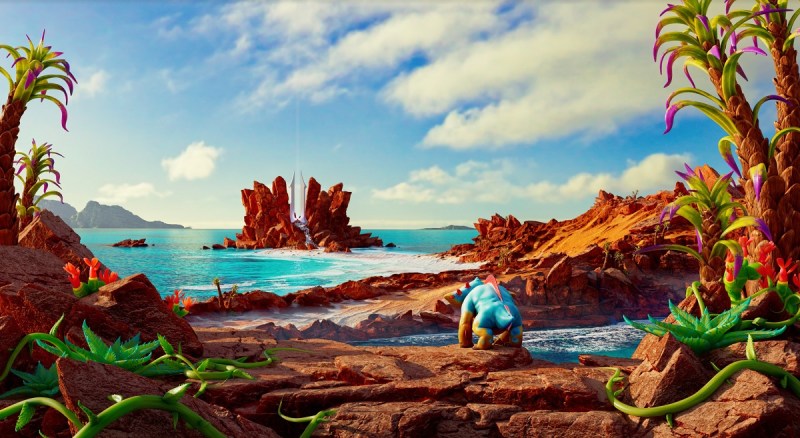 Above: Illuvium is creating a DAO.Image Credit: Illuvium

Illuvium is planning to create a decentralized autonomous organization, or DAO, which allows the community to gain ownership of the project and, in turn, engender a financially self-sustainable gaming platform. Revenue is generated from in-game fees collected and purchases of Illuvials on the IlluviDEX exchange.

“As it stands, there are no real triple-A quality gaming titles on the blockchain,” Aaron Warwick said in an email. “Axie Infinity, Aavegotchi and Dentraland all have certain aspects similar to Illuvium. However, the level of quality video game artwork, NFT collectability, DeFi reward mechanisms all combined within a community-driven DAO does not exist as yet.”

DeFi staking mechanisms convert in-game profits from Ethereum to synthetic Illuvium ($sILV) and distribute the tokens fairly to staked ILV token holders. Integrated with a hyper-scalable Layer 2 solution, and built on the Ethereum Network, Illuvium offers players the opportunity to engage in gameplay with access to zero gas fees (typical transaction fees on Ethereum) for minting or exchanging.

A further medium article will be released in the coming weeks detailing how to participate in the Balancer Launchpad on March 30. The game will be available to Windows and Mac users, built on Unreal Engine 4, at the end of the third quarter of 2021. Kieran and Aaron Warwick are the younger brothers of Synthetix founder, Kain Warwick. The younger brothers have game development and computer engineering skills, and they saw potential in bringing traditional gamers into the decentralized market by creating a collectible game that is fun to play.

The company has 37 people as core contributors to the DAO. Illuvium is on Ethereum, and the hyper-scalable game is being built from the ground-up onto a layer 2 solution called Immutable X. This enables it to have no gas fees for minting and exchange, and sub-second transaction times.

“This also allows us to offer NFTs at different prices, where most projects have to keep everything expensive because otherwise the gas fees become unaffordable,” Kieran Warwick said. “That doesn’t mean we won’t have some rare and expensive items, but we’ll have a price point for everyone.”